Be honest. Be nice. We're all humans.

As you probably know, GD.SE is part of the Stack Exchange network. SE's model is based on four 'cardinal' rules. The first two ones: Be honest, be nice. (they are not mutually exclusive ;) ).

This post is not directed at any specific user, nor is it in response to any specific incident. The subject of rudeness and unwelcoming comments has been brought up in our meta the past, for example here and here. It has also been discussed to exhaustion in SO's meta, here, and here.

If someone is rude to you, that is not a free pass to return the gesture. Let it go. A flame war will never result in a positive resolution. Someone showing you disrespect if not justification to be disrespectful. If you find something offensive: flag so that a moderator can investigate and do their best to neutralize the situation.

"The fact that one thinks a question (or answer) is horrible, incorrect or useless does not provide an excuse for insults or rudeness".

SE is very clear about this: Civility is required at all times; rudeness will not be tolerated. Treat others with the same respect you’d want them to treat you because we’re all here to learn, together. Be tolerant of others who may not know everything you know, and bring your sense of humor.

If you see a post that needs attention, instead of leaving a rude comment please consider doing one of the following:

Our average flag handling time is less than an hour, and most close votes are solved way before that. In that hour, however, we'd rather have a bad question floating around, than rude comments that drive new users away, as OPs get notified of them instantly.

So... Be Honest. Be Nice. Treat each other like humans without exception.

It is of course impossible to disagree with this; it will not turn into a discussion - and that is a good thing. I just thought I should contribute this little gem: 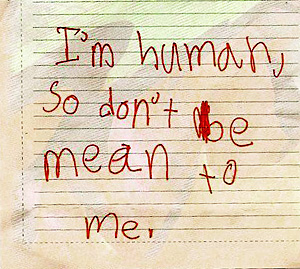 4
How should we handle questions that don't show enough research?
6
Should I call attention to rude users and comments? If so, how?
-1
Where's the "Welcome" mat for new users?

8
Improving our answer ratio, or "One step closer to an all green Area51 page!"
3
How do you respond to questions or comments as answers?
10
Joke but be helpful
8
Overzealous reaction to an important user?
1
Is my question relevant and are these two comments in line with SE's TOS?
16
I'm struggling to figure out why people vote the way they do regarding Opinion / Too Broad
7
Chat room for spam coordination