Is my question relevant and are these two comments in line with SE's TOS?

I'm writing in regards to a recent post and specifically the two comments from Luciano and Vincent as well as Luciano's response to my comment (the response is undocumented because Ryan deleted it). Luciano's and Vincent's original comments can be found below, however I wasn't able to take a screen shot of Luciano's response to my comment because it was deleted, but I will give the gist from memory as recommended by Ryan. 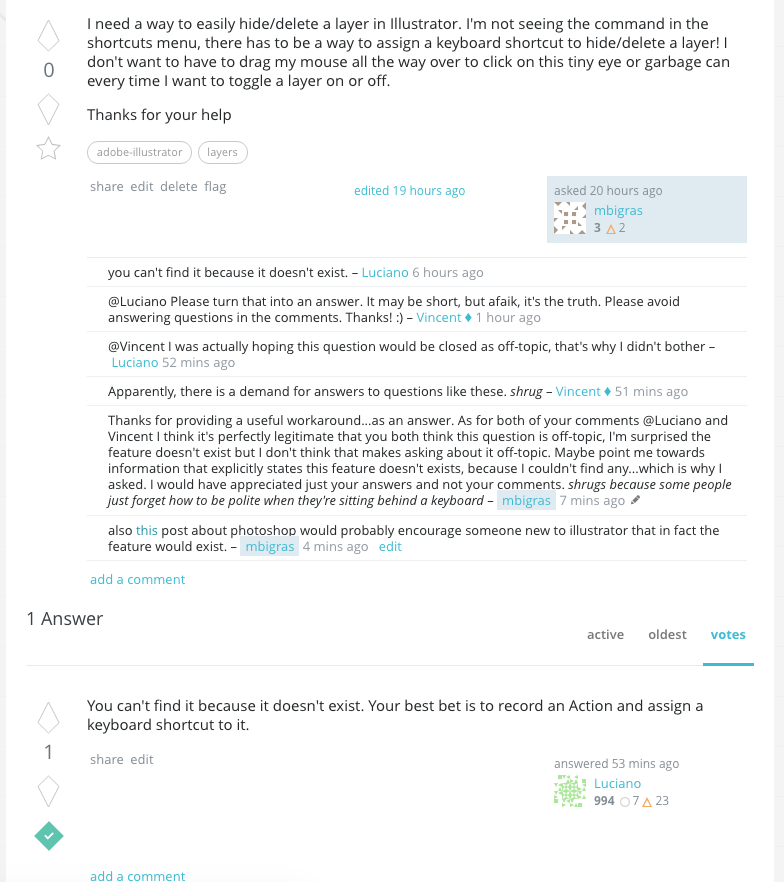 There are two main issues I would like to get input on:

"Similar to Illustrator, is there something like CMD + 3 that would let me hide selected layers?"

"I was actually hoping this question would be closed as off-topic, that's why I didn't bother" - Luciano

Apparently, there is a demand for answers to questions like these. shrug - Vincent

I think this comment is disrespectful and potentially hurtful because it is probably sarcastic and treats the question in a dismissive way, essentially suggesting the question is not worth anyone's time.

I'm familiar with the culture of Stack Exchange where experienced members become too burdened to answer repeated questions and decide to start telling people to RTFM or send gifs of typing the question into google. It makes sense that a member, especially a moderator, would become frustrated by seeing the same questions repeated. However, I think if a question has been asked many times then simply linking to the answer or closing the topic is the kind way to go, the fact that some people choose to belittle the OP is a bummer because it creates a mean-spirited environment for people who are new to a field of study, like graphic design for example, and generally trying to have fun and learn new things. But, I don't believe this question falls into the category of an "age old question that could have just been answered with google or by searching the forums" because of the reasons given above, and, I think it deserved a respectful response in the same way that this similar question by a more experienced member received a respectful response.

I'm currently unable to flag their comments because between Luciano and the moderators the comments I'm discussing have been hidden. Further, the user that made one of the comments is a moderator. I would appreciate 1) If someone from Stack Exchange commented in this specific post and pointed out that the member Luciano and Vincent are not inline with the Terms of Service because they are not " treat[ing] our service and community with respect". Further I would like some form of action taken against Vincent because he/she is breaking his/her agreement as a moderator by choosing to make comments that don't treat other members with respect.

Looking forward to hearing your thoughts.

Bit of a storm in a teacup here. I get where you're coming from; those comments were slightly rude in the sense of belittling your question.

It was worth raising the issue but probably not with the vehemence with which you've done so here.

I think it would've been more useful to address it in chat first directly with Vincent and if that went badly, which I doubt it would've, then raise it here.

A few points for you:

A single point for Luciano and Vincent:

To be honest, I think the only one lacking any respect in this is you.

I'm not going to try and address your first part because it's a huge topic and I'm tired of debating what our community should do :)

As for your second part regarding rudeness, I don't see the rudeness that you see in Luciano's comments that you show in the question (I can't say as to any removed comments). They are not directed at you at all, but rather talking about the on topic-ness of the question being asked.

I can see your claims somewhat in Vincent's second comment because it is loaded, implying that the people are wrong and that the question is wrong. It does not focus on the on topic-ness of the question. However, I don't believe that this was his intention.

The problem is that Graphic Design is not about how to use software, as such. So asking about hotkeys is on the very thin edge of things that fit the scope. But one cannot help being affected by what users, even new ones, think of the scope - eventually people will cave.

The thing is that asking how to use Adobe's tools is somewhat tolerated. But you may notice that there is very little tolerance for such things in other software.

The second thing is that GD is much slower than the programming forums. So close votes really tend to be discussed. On StackOverflow you can expect a question to be closed quickly. Here a close might take weeks or months (or years). And that's not very fruitful for anybody.

In the case of Vincent's answer, that's not typical of him. But remember that he can not only vote for closing questions, as that would immediately hammer the question closed.

Should this question be closed? Most probably.

I think one issue that hasn't been discussed here, and I don't want this to be taken as rude, but since people know me as being blunt I'll still say it.

That said, you post an answer when it mostly certainly has no relativity to the question you asked in the answer area. Beyond that you go to a StackExchange website that is far more tolerant than any other stack and you get offended when we try to tell you your question isn't in scope.

Frankly, I do not see an issue with what was said. My issue was that your question wasn't in scope and I get why Vincent didn't close it, but frankly it should have been closed and, as I stated, you're asking for software changes when the site's main focus is graphic design. Another issue I have is that it looks like a question with no basis or effort visible. If you at least put the same amount of effort to show what you're after as you did in this meta post, I would have even upvoted your question.

To that end, Vincent is one of the nicest guys here and I've never seen an issue with anything Luciano does, so I think you're upset with us not allowing it and are taking the comments to heart.

Like any SE site, it is run by the community. If you want the scope to change, then participate. But going to a site with what can be perceived as hostile will be met with a fence in its place.

Sorry to be late to the party. Been traveling. A lot has been said, and accepted which is good but I'd just like to give my own take real quick:

Is my question relevant?

How can I quickly hide or delete a layer in Illustrator without using the Layer Panel?

And particularly you feel it is because of this similar question: Keyboard Shortcut to hide selected layers in Photoshop

Is it relevant? Yes. Is it interesting? Not really. I downvoted it, I'm the only one in fact to downvote the older question. I downvoted yours as well. As I mention in my answer https://graphicdesign.meta.stackexchange.com/a/2480/2611

I don't usually vote to close stuff like this though, I downvote.. Close is for off-topic, downvote is for lack of effort.

And that was before I became a mod. Now I definitely will not close since its binding.

But more to the point - why did I even answer the other question? Because multiple people provided incorrect answers. Those are now deleted and you don't have enough rep to see that. When I see people giving erroneous answers it greatly increases the likelihood I will want to answer it even if its a bad question to begin with.

Are these two comments in line with TOS?

That's a matter of opinion. It's a fine line that you can see just by reading the meta. Hopefully as a result of this more members can see why even things they might not consider to be anything but friendly banter can be taken as sarcastic and off-putting comments.

8
Should extremely basic 'how to do this in software X' questions be off-topic?

9
What do we do with HTML/CSS questions that are code-based but simple and focused on layout or implementing a design?
6
I just don't get it. Which software 101 questions are design related and which one's aren't?
16
Be honest. Be nice. We're all humans.
2
Should we move all future 3D questions to Blender.SE?
2
Are operation settings questions to Graphic Design Applications off topic here?
11
Challenge to regular members: Ask one non-how-to question this week
2
Why is this question off-topic?
6
Should I edit question with accepted answer closed as 'off-topic' for lack of effort (i.e what have you tried)?
14
Is it ok to edit someone else's images?
0
Why is there a question with tags on freelance, business, clients on Graphic Design SE?