How should we handle questions that don't show enough research?

Recently a question was asked that appeared to be a basic help me find stock-photography question. It attracted a LMGTFY link, which another user didn't appreciate.

So....... what do we think of (seemingly) poorly researched questions as a GD community? How should we handle them? Should they even be allowed, or closed on sight?

The "Ask Question" page has the following panel in the sidebar next to the question fields: 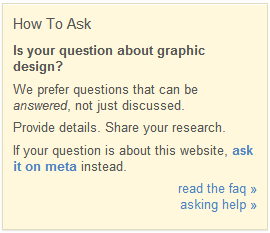 "read the faq" links to The FAQ.
"asking help" links to How To Ask.

First up, this was a bad question. Everyone can agree on that - probably including the guy who asked it, who was clearly in a rush and has used other stackexchange sites before. I think we're pretty much agreed that the best way to respond to questions with no prior research is to tell people as clearly and simply as possible what they're doing wrong, give them the chance to improve it, and close if this doesn't happen.

The person who commented with a "Let me google that for you" link (if you've not seen one before, they're like this - http://lmgtfy.com/?q=what+is+lmgtfy ) was right to comment pointing out what was wrong, and right to down vote and vote to close (I also voted to close, and I don't do that often). The disagreement was with the way they did it in this case. (It's worth mentioning that they are someone who's a really experienced, respected and valued regular user here, who absolutely knows what's okay and what isn't, and who is usually one of the very best in our community for promoting the right kind of positive atmosphere here.)

I think question behind the disagreement that led to this issue is, "When someone posts a bad question (bad almost to the point of being rude), is it okay to be rude to them back?"

The answer has to be no, because:

This issue of niave newcomers and frustrated regulars is a constant thing in every stack exchange site, every web community and arguably, every community that accepts outsiders. There's a great article about it by the stack exchange blog people who have put loads of thought and research into the issue, it's well worth a read: http://blog.stackoverflow.com/2012/07/kicking-off-the-summer-of-love/

Basic gist: Don't drop your standards. Do communicate them in a way that is direct, straightforward, non-snarky, and professional.

Is there some sort of documentation that we can direct people to? I'm fine with closing a bad question, what I don't like is the idea that we welcome a new user by saying "Hi! Welcome! Your question stinks! Try again!"

This site does have a learning curve. It has its own terms and rules and whatnot. I've been hanging around Stack Overflow for months, and now that I'm finally in a forum where I feel like I can participate (SO questions are either over my head so I can't answer or already asked so I can't ask them :P), I sometimes wish there was a glossary or help manual to teach me finer points about the site's mechanics.

In my experience, the only people who ask really bad questions are newcomers, which means that there's a good chance they just don't know what a good question is.

So, could there be some kind of stock reply that moderators have for a bad question like we saw today? Like, "Hey! Welcome to Graphic Design Stack Exchange! Your question is the kind of question that we prefer to avoid on this site. Here's a link to something that says why, and here's another link to...I don't know, good sample questions or tips on how to ask a great question. We encourage you to edit your question, if you want help just ask..." Something like that.

That way you let people know that they're welcome here and people are willing to help, but the standard is the standard and you've got to learn it a bit if you want to participate.

My attitude on these is that if I can find it easily in the program help, a top level menu or a Google search, it's "not enough effort" and not useful as a question. There was a woman (a pro designer, I'm sad to say) on the InDesign listserv who literally used the list as her help function. I swear she never, ever clicked "Help" far less studied a tutorial. Those we don't need.

On the other hand, there's the case of the person who has tried hard to find how to make and modify "outlines" (let's say), not knowing that the Adobe term is "stroke." Those I'm okay with, and the terminology correction is something that can be useful for others.

Not the answer you're looking for? Browse other questions tagged discussion comments .

7
How should we rephrase "no ultra simple questions" into the FAQ?
4
Should we migrate the "how to" questions to Super User rather than simply closing them?
7
Should we allow "recommendation" questions?
5
Proposal to update the FAQ
4
Can "general reference" be added to reasons for closing a question?
5
How broad are you willing to allow questions to be in order to promote more interesting question content?
7
Would it not be helpful to have an FAQ page or location where common links can be found?
13
Changing how we handle low-effort and tutorial-on-demand questions
14
What to do with tutorial requests? -- part II