Are questions about the rationale behind a design choice on-topic?

I've read both What are the guidelines for asking for a critique of my work? and What topics can I ask about here?, and it seems that this kind of question is fine. What do you think?

Below is my draft:

What make this design be suitable to use for poetry texts?

This is how WordPress designs a block of verse: 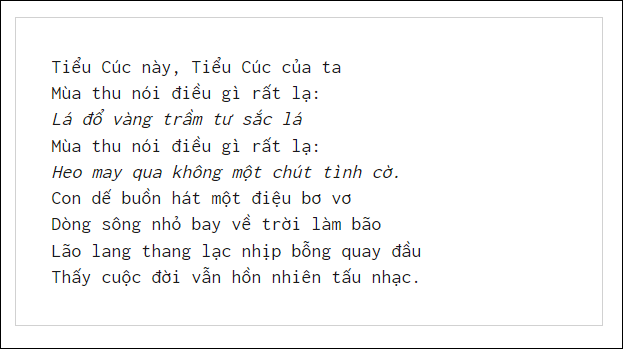 Honestly I don't know how to provide more information. Why does that design suit poetry texts?

What make this design suitable to use for poetry texts?

The problem with asking about the rationale behind a single entity is that it's not likely to be documented enough to be answerable by someone else than the original designers.

Also, some may recall there used to be a close reason for asking a question that is "too localized". These questions are not likely to be answerable and useful to others. This question falls into the "too localized" category as far as I'm concerned.

I think it would be on-topic (and more likely answerable) if the question asked about a body of works instead of a single one.

For example, this question has some similarities but is applicable to multiple instances in a common field and is well documented.

I'm pretty sure asking "Why are most poetry works typically laid out with sober type and a lot of white space?" would yield interesting and useful answers.

Other related questions: Why is Courier the preferred font in the legal industry?

The easiest way to find out is to post your question and see if the community closes it or not. Just don't take it personally.

I strongly suspect this would be closed. It's been a while since such a question were asked so I could be wrong. However, in the past when a question like this was asked the response is, "We are not the designers. We don't know their motives and rationale. You would need to ask them."

In a critique question we ask users to mention what their goal is and then help make sure the design achieves that. This is not that at all, in fact its the opposite. You're giving us a finished design and asking us to determine what the goal is. It would be like me painting a big red circle just off-center on an otherwise blank canvas -- showing it to you -- and asking you to tell me the meaning behind the piece

I see the proposed question is exactly the same with the forth example in What are the guidelines for asking for a critique of my work?:

Good Example: "Does the piece convey an air of playfulness and excitement?"
Bad Example: "What impression do you get?"

So I would vote it's on-topic.

Not the answer you're looking for? Browse other questions tagged discussion on-topic-definition .

20
What are the guidelines for asking for a critique of my work?