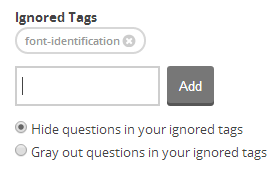 Naturally this is an option for any type of question you're not interested in.

I thought I'd spell it out here since I'd noticed that someone, or possibly a couple of people, seems to be down-voting all font id questions, including good ones.

Every piece of content doesn't need to appeal to every user. If every user downvoted every question they weren't personally interested in, most questions on most sites on the network would be downvoted to their doom.

It's perfectly normal for there to be a few tags you're not interested in. Just ignore them, and if they still bug you, use the feature provided.

The mystery downvoter should probably also be aware that StackExchange is moving towards an "interestingness algorithim" that estimates what questions users are most likely to be interested in by their behaviour, including what you click on. It's already in action on StackOverflow and may be spreading to other sites, too.

So, if you click on every font-identification you see then downvote it, you're stacking up user data that this potential future algorithim would most likely take to mean that you love font ID questions - but you just can't quite find that perfect Font ID question that leaves you satisfied.

In addition, if you see a font identification question that isn't tagged properly, please help out and fix it! These questions are the most often mis-tagged. They likely only need the font-identification tag, not fonts, typography, typefaces, text, and adobe-photoshop tags (or whatever else tag spam that got thrown on to max out the allowed # of tags).

To your first point

I didn't know it was a big mystery, considering I've mentioned multiple times that I downvote nearly every font-identification question. Can't say if someone else has taken this approach as well, but I'm fine going on record for it.

I could choose to ignore them but I want to downvote them. And for the record, I don't downvote all of them. I downvote every one that doesn't give us anything to go off. That doesn't say what it's from, maybe lacks an image, or an attempt to find it first. They are overly simplistic questions and I will continue to downvote them because they don't help any future visitors.

For example the Font ID question about what font is used when viewing source code I upvoted. Here's another one I've happily upvoted:

What is the font used on PHP.net to show code?

I could see that being useful to others and was worded in a way others could find it. A question like this recent one:

Yep, downvoted. It's not because its a Font Identification question, its because of the quality of the question.

As to your second point.

Tag Future Report does not at all work how you believe. On my current report it shows: 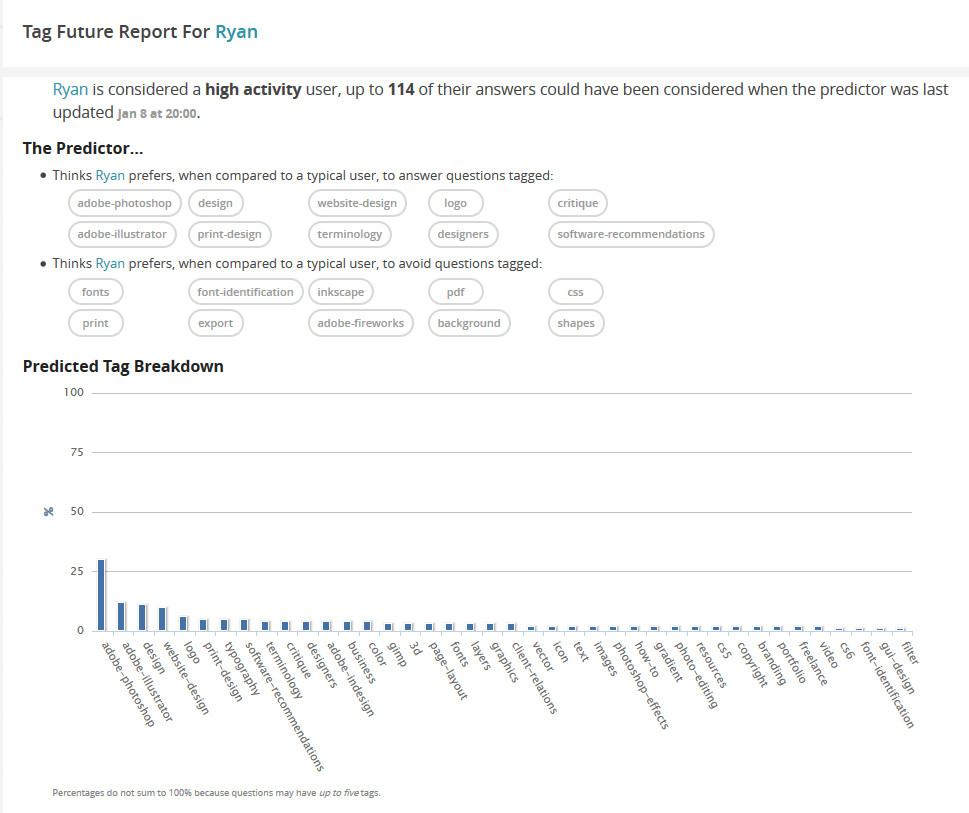 I don't vote to Close them because the Community has deemed on topic. However, the Downvote states: This question lacks research effort, is not clear or not useful. Most font ID questions fall into this category in my opinion. If you don't agree than that's fine you're welcome to Upvote or leave neutral. I find it particularly interesting that:

Can find people discussing Vote to Close and most saying Downvote is the appropriate option. To the point of Benteh stating:

Actually, @Scott, if that is the case, that any rubbish gets upvotes because the user is new, that is seriously worrying. That, I would say, is a far worse problems. Maybe a meta-post expanding on that would be good.

I am not going to ignore or sugar coat font-identification questions simply because the user is new. For example the question I used above, https://graphicdesign.stackexchange.com/questions/36865/please-identify-the-typeface-in-this-picture, was given an upvote by someone. In what scenario is that deemed a good question? Only because it is by a new user? I'm sorry, but not to me.

Finally on the topic of ignore

Aside from wanting to downvote it, I feel a certain level of responsibility to questions regardless of topic. As JohnB requested here to edit the question's tags --- I do that. This isn't to help the person asking as much as to help the moderators and regulars by taking on some of that burden. If I ignore a selection of questions than I feel I am acting on bias.

11
Is it time to disallow font id questions?
7
Is a new "poor question" close reason needed?

9
Welcome messages to encourage new users
3
Tagging: What should the Serif and Sans-Serif tags be used for?
1
Font identification requests: Teach a man to fish?
5
Questions that don't have any hope of helping anyone else?
12
Moving forward with font identification questions
4
2015 Moderator Election Q&A - Questionnaire
3
Optimising the second and third custom close reasons
9
Questions asking for help finding a suitable font
11
Graphic Design Biweekly Topic Challenge